My name is Ilaria and I recently completed my Masters in NUI Galway. While finishing my studies and excitingly waiting for graduation day, I had the great opportunity to work alongside Lorraine Tansey, the Student Volunteer Coordinator of the ALIVE office in NUI Galway. Thanks to my job role, I was able to participate to several events and I had the pleasure of meeting extraordinary and hard-working people, from brilliant students to pillars of the Galway University community. I was also able to witness some behind the scenes regarding the amazing work and preparation for the event that everyone was waiting for: Galway as European Capital of Culture of this year 2020. Many are the events on the list for this special year in Galway. Hence, many are the participants, the hosts, the partners and the volunteers! Speaking of partners, NUI Galway is the Official Legacy Partner of Galway 2020, European Capital of Culture. Borrowing the words of the University President, Professor Ciarán Ó hÓgartaigh: "[…] NUI Galway is committed to respecting and supporting the development of a cultural legacy programme which will leave a far reaching impact on Galway city and its hinterland."

The Student Volunteering Programme ALIVE has also been very involved with the organisational steps and has been a great resource for assembling and training as many volunteers as possible. It’s important to make the students feel involved and grasp the interest and the willpower of national and international students. Galway 2020 is a great opportunity to discover the city of Galway throughout diverse points of view and for being an active participant to the many events on the programme.

By the end of the first semester, I could feel the thrilling atmosphere lingering around campus waiting for the new year and for the official launch of the Galway 2020 – NUI Galway partnership. The event that announced the NUI Galway strategic partnership with Galway 2020 European Capital of Culture has occurred on Thursday, 12 December 2019, at the O’Donoghue Centre for Drama, Theatre and Performance. It was officially launched by Professor Ciarán Ó hÓgartaigh, President of NUI Galway, and Arthur Lappin, Chair of Galway 2020. The event gathered a great crowd and successfully presented the projects in which NUI Galway will be involved. Culture and creative arts have always been relevant for the University and its goals. In fact, NUI Galway will be the hub for selected Galway 2020 events, opening the campus to artists, workshops, performances. The University will also be protagonist with dedicated projects for 2020, in order to engage students, educators and the general public. Culture and innovation, together with music and art, will create the chance to think about our world, to increase our knowledge and initiate critical debates. NUI Galway will grow with every person that will be encountered and every experience that will be shared within the path of this exciting year ahead.

The words of the speakers during the event were passionate and incredibly inspiring. The room was full of energy, big smiles and great hopes. I also believe that the complimentary delicious cakes and the logo pins enhanced a great start for this Galway 2020 partnership!

Hello! Neringa here! I am a Computational Genomics Master's student, an ALIVE Intern, SUMS tutor and a volunteer, most importantly, a Galway 2020 WaveMaker! While going on wild ALIVE intern adventures in Semester 1, the buzz around Galway 2020 and becoming a WaveMaker, in other words Galway European Capital of Culture 2020 volunteer, got louder and louder. I have been considering getting involved since the launch, but was not sure if I had the time this year... until I went to one of their volunteer training sessions in November. I. Was. Blown. Away. The organisers have presented to us their plan for 2020 and, I have to be honest, I have never seen anything more fascinating in my life. I realised then that 2020 is the year when the depth of history, the noise of culture and the strength of traditions of County and City of Galway will come to life like it never has before. I had to become a part of it! So, here I am! 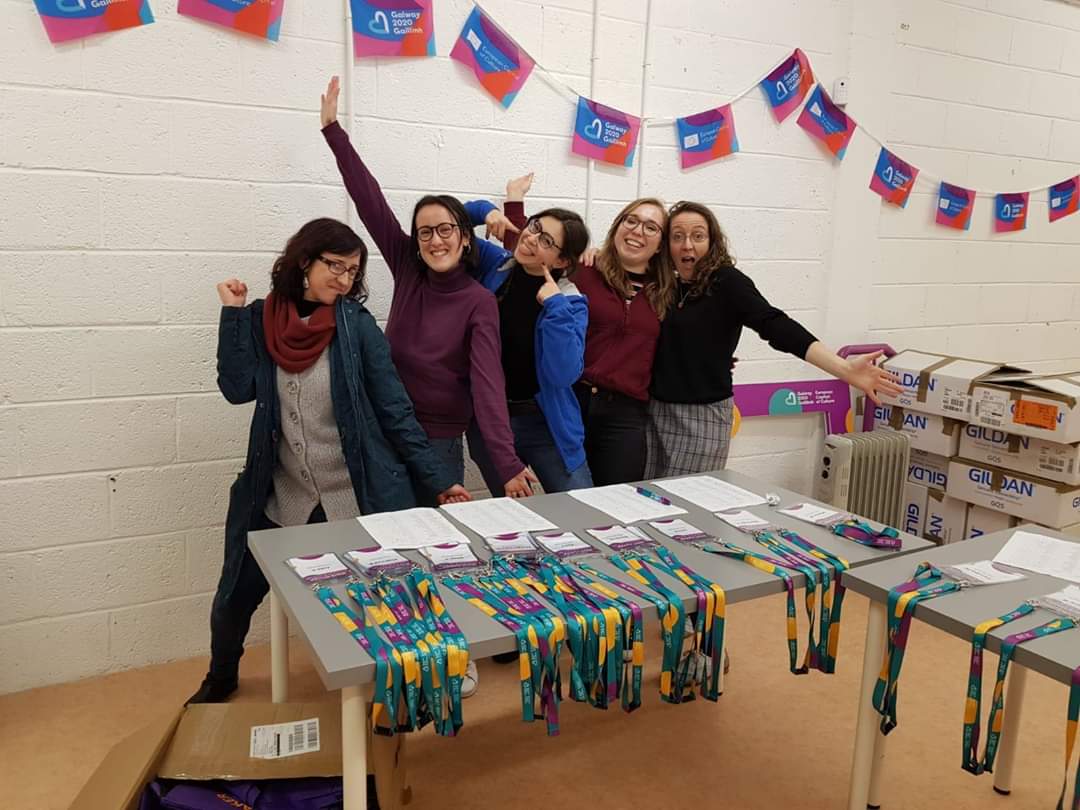 I signed up to be a volunteer at the official Pass-over of the Title of European Capital of Culture to Galway in the Galmont Hotel where I was going to meet and greet various important people anticipating the Opening Ceremony before walking down with them to South Park. I was called in to do a short briefing the Thursday before the event, where we were given out t-shirts, jackets and lanyards. It was short and to the point, but very informative, and most importantly, everyone seemed optimistic and full of excitement for the weekend. 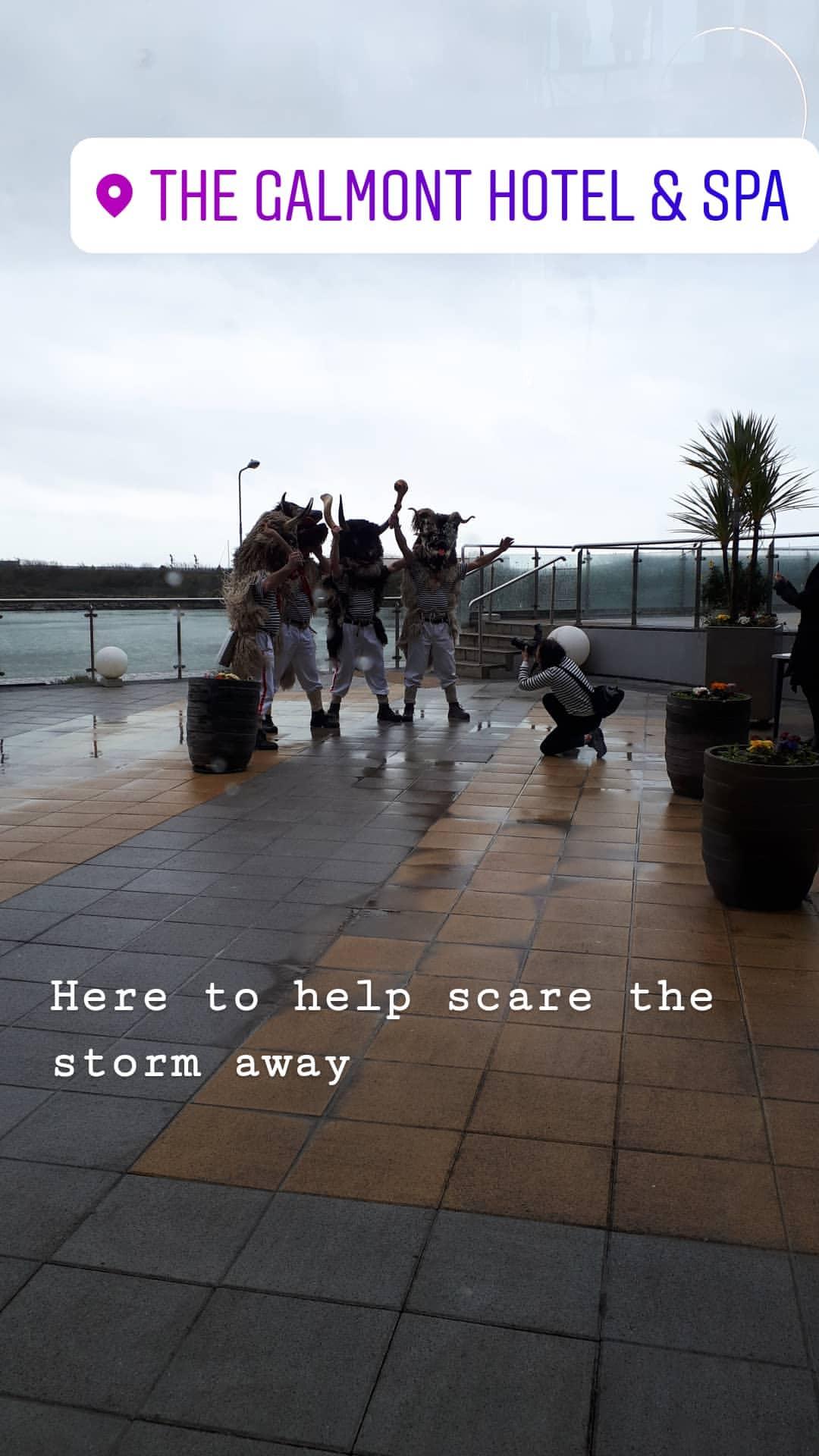 On Saturday morning we got the news that the Opening Ceremony in South Park wasn't going to take place anymore due to the weather warning. We arrived at the Galmont since the Launch was still taking place. The team seemed devastated about the Opening Ceremony when we got there, but we all tried to make the most of the event in Galmont. Throughout the day, all of the volunteers were either helping with the photo taking, the registration or the meet-and-greet; I was one of the meet-and-greet volunteers. 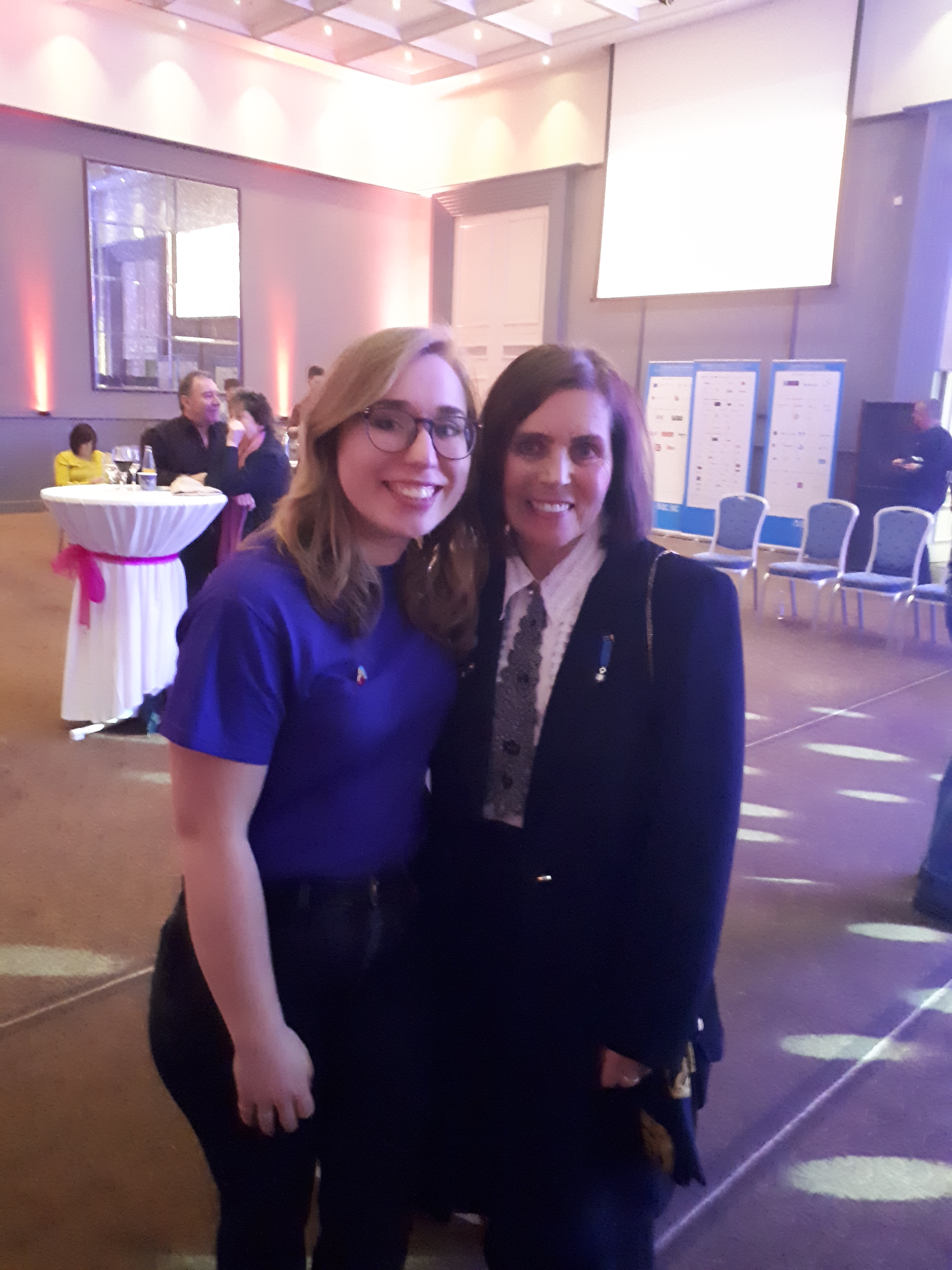 Meeting elected Councillor to the French in Ireland, former honourary Consul of France to Ireland

My day started with helping the team prepare for everyone's arrival and by the end I had chatted with and helped out various other volunteers, team members, politicians, business owners, journalists and ambassadors of various countries.  At one point I was tasked to find the French filming crew to direct them to the French ambassadors attending the event.  I was blown away by the number and the quality of the acts who went on stage. You could see faces in the crowd and people on the stage, proud of Galway and the work that was put in thus far. Then and there I realised how happy I was with my decision to become a WaveMaker. To thank all of the volunteers who signed up to help out at the Opening Ceremony, the team organised a social event in Electric at the end of the day. There, I had the chance to meet other passionate volunteers, a lot of them students in NUIG! 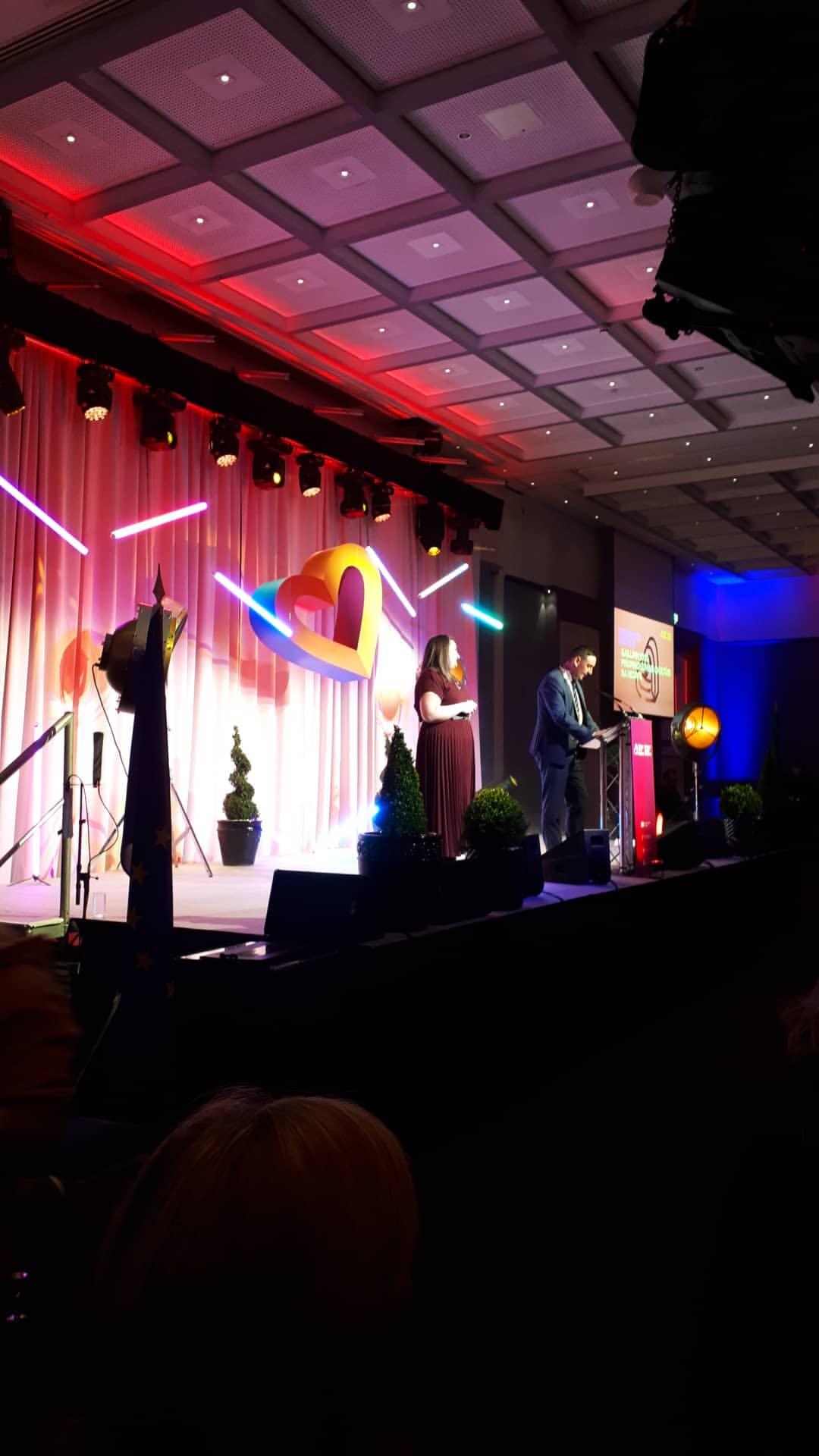 Following months of excitement and anticipation, the cultural programme of Galway 2020, European Capital of Culture, was officially launched in Clifden on February 1st. Over the course of the year, thousands will be spellbound by events which will channel the magic of Galway through themes of migration, heritage, language, and landscape. Of fundamental importance to the successful delivery of these events will be the efforts of the 790 WaveMaker volunteers, 120 of which are involved having registered through the ALIVE Programme here at NUI Galway. When all is said and done, our students will surely have made a significant contribution to this great event.

Such participation is reflected by that of the university more broadly in its role as Official Legacy Partner, which will manifest itself through a multi-strand strategic partnership. Announced publicly on December 12th last, this partnership commits the university to a range of endeavours ‘which will have a lasting impact on Galway’s creative arts sector.’ This will involve, among other things, the hosting of programme events throughout the year, as well as the development of both curriculum and infrastructural space dedicated to the arts. Fundamentally, by consolidating the position of ‘culture at the heart of [its] role’, the University is obliged to support the development of a more sustainable creative arts sector in the city and county moving forward.

Very interesting to hear of how the Community and Voluntary Sector consistently fights for its survival despite, as is particularly evident now, it’s crucial role in helping to meet peoples’ needs, and to promote inclusion and accessibility during a very challenging time in our society. Hearing of the different services at The Wheel Virtual Summit highlighted the sector’s role as a “social immune system” and, with this, resources should be guaranteed to service providers as they are needed now more than ever. This would also probably save the Government money in the long run. Also, very interesting to hear of calls for greater and more comprehensive use of data in the sector; shows how sometimes it, unfortunately, all boils down to numbers!

On a different note, fantastic to see such wonderful commitment and passion among the student population this past year as evidenced through the many nominees at the USI Student Achievement Awards 2020. Their leadership, innovation, and drive is to be commended, and a cause of great hope for the future! Also, a big congratulations to the three NUI Galway winners – Réiltín Tynan, Cameron Keighron, and the University of Sanctuary initiative!

Volunteer to make a video about your college course