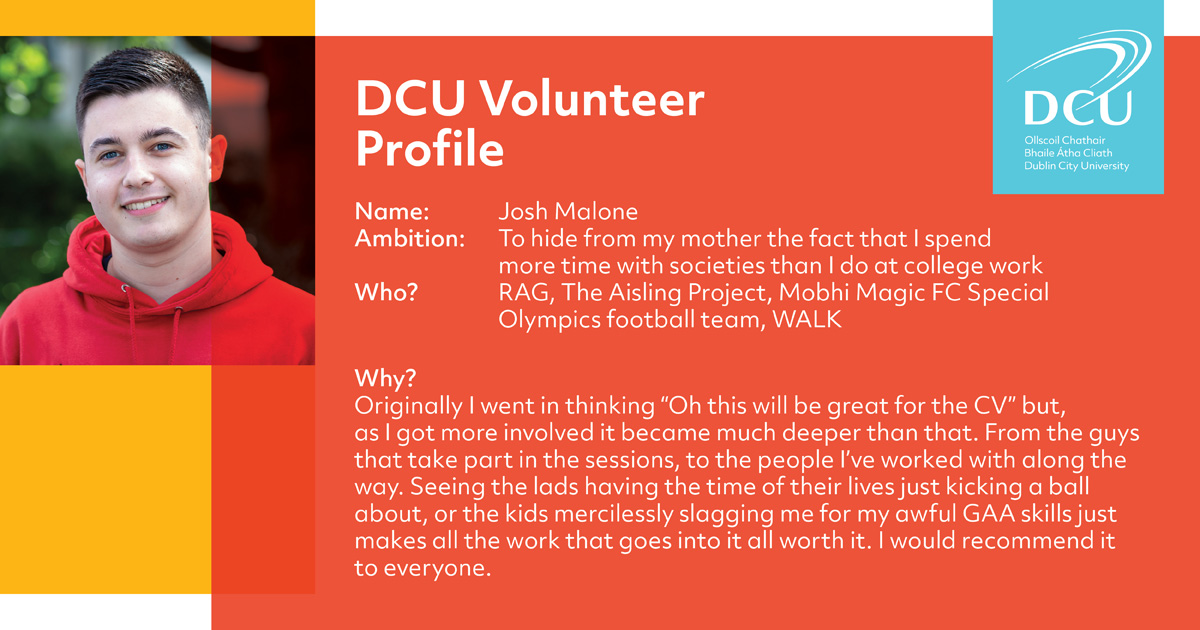 Ambition: To hide from my mother the fact that I spend more time with societies than I do at college work

It all began when I was unwittingly dragged along by a friend to some ‘cool event’ on Tuesday evening. Little did I know that I’d arrive to see a bunch of highly caffeinated kids running around a pitch kicking shades out of each other. Anyway, I jumped in and loved it immediately.

From then I joined RAG and was told about a need for a coach on a prospective Special Olympics football team in Poppintree. That summer I went and got my coaching badges and started coaching ‘Mobhi Magic’ (now the ‘Poppintree Lions’). I’ve been doing that for a year now and we have our first official game in the coming month or so!

Originally I went in thinking “Oh this will be great for the CV” but as I got more involved it became much deeper than that. From the guys that take part in the sessions to the people I’ve worked with along the way, especially in RAG, they’re all just wonderful people and it gives you a great feeling knowing you’re working such pure, kind-hearted humans.

Seeing the lads having the time of their lives just kicking a ball about, or the kids mercilessly slagging me for my awful GAA skills just makes all the work that goes into it all worth it. Would recommend to EVERYONE.

Best memory for me was actually the whole BICS (Board of Irish College Societies) Awards experience. You’d think that getting up at all hours of the morning to get a bus to Cork, going through a day of presentations to be then left by your bus for 3 hours to loiter outside a hotel would be a bit of a poor memory but that couldn’t be further from the truth. The craic throughout the whole few days was something I’ll never forget. It was like we were all a little family and I think that’s what confirmed for me that I belong in DCU.

Then to actually go and win Best Civic Society with RAG was just one of the best feelings I’ve ever had. We don’t do what we do to win awards but to see all the amazing work that group of legends put into being acknowledged is something I’ll hold dear forever.

One thing you’ve learned from giving back

One thing I’ve learned from giving back is that sometimes the simplest things make the biggest difference. Often I see a simple high five or little joke can make a person’s eyes light up and that’s just class.

This is going to sound really mainstream, but New York. Love me a busy city with pretty lights and people with funny accents and no regard for traffic.

Random fact about you

When I was a kid I used to dress up as Spider-Man and fight my Granda on the floor of their home - I won every time!