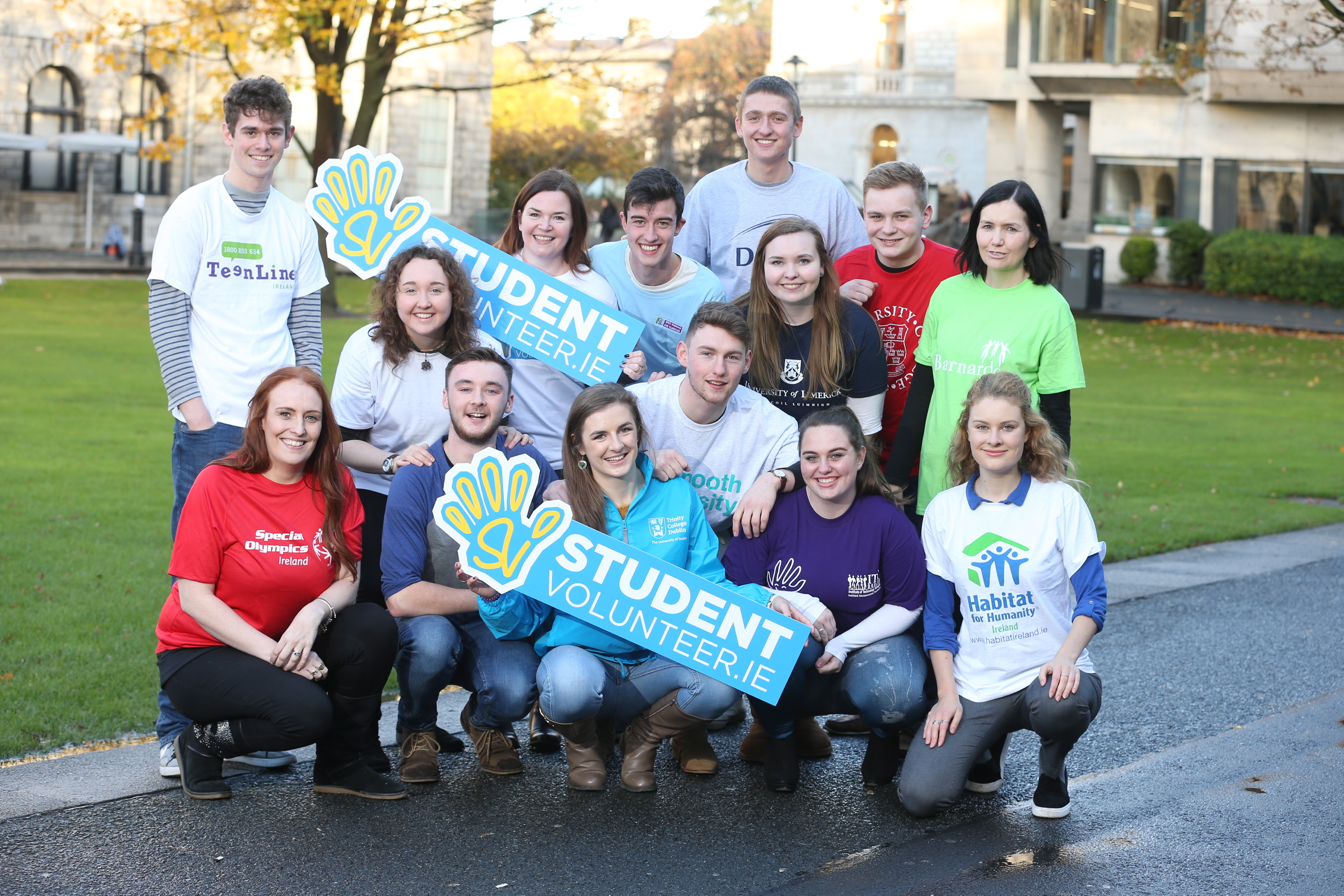 Every year in Ireland thousands of students from our universities and institutes of technology carry out over 100,000 hours of volunteering. UCD and nine other third level colleges have now joined forces to develop studentvolunteer.ie - a brand new online resource which matches students’ interests with volunteering opportunities. The portal is the first of its kind globally and aims to enhance students’ awareness of their role and responsibility in solving challenges such as homelessness, social exclusion and our ageing population.

“In our work for the Saint Vincent De Paul Society here at UCD, we know that we’ll never be able to solve the housing crisis or eliminate poverty in Ireland. What we can do, is make somebody’s day a little bit better. Volunteering is a great opportunity to make friends, it broadens your perspective on the world, and makes you appreciate what you have. It’s an opportunity to put a smile on someone’s face.”  Dan Kieran, student, University College Dublin

Potential users include up to 100,847 (HEA 2015) students across all higher education institutions and up to 8,000 registered Civil Society Organisations. For charities such as Barnardos, Habitat for Humanity, TeenLine and Special Olympics Ireland, student volunteering is a vital component of their ongoing work:

“With over 3,000 registered volunteers under 25 years old, Special Olympics Ireland depend on the student volunteers among our younger supporters to assist with our fundraising activities and sustain our programmes through working in our clubs, helping at events and participating in committees at local and regional level”. Claire O'Connor, Volunteer Services Manager, Special Olympics Ireland

Shortlisted for the 2016 THINKTECH awards, studentvolunteer.ie has been developed under the umbrella of the Campus Engage Network based at the Irish Universities Association. There are currently 10 Higher Education Institutions (HEIs) invested in the portal: UCD, NUI Galway, IT Tralee, UL, MU, Trinity, IT Tallaght, DCU, UCC and DIT. The online system is open to ALL Higher Education Institutions (HEIs), private colleges, VECs, etc.

The civic role and responsibility of colleges and their graduates is becoming a central issue in the global education discussion, with increasing pressure on institutions to demonstrate how higher education is adding value to society.

The value of volunteering is recognised by the United Nations who have designated December 5th as International Volunteer Day (IVD).

Volunteering has numerous benefits for students and for society. Ireland’s new National Skills Strategy 2025 focuses on graduate attributes such as high level cognitive, leadership, entrepreneurial, analytical and interpersonal skills. Volunteering is an excellent outlet for students to test, refine and put these skills into action. These skills are very much valued by employers:

"In an increasingly competitive employment market, when I review CV’s the selflessness of a volunteer can stand out like a beacon in a sea of self-interest. The functional expertise that a volunteer can learn in an organisation, offers a head start compared to others who start at the beginning when entering permanent employment for the first time.”  Billy Norman, Customer Account Manager in Unilever

Evidence shows that getting out and volunteering can improve individual mental health and well-being. Volunteering is also an excellent pathway for international students in Ireland to integrate into their communities and make new friends.  Higher education institutions across the country are battling student retention. Getting involved in extracurricular activity on and off campus is proven to keep students in college. International volunteering cultivates core graduate attributes such as cultural awareness, languages and increased understanding of global social responsibility. 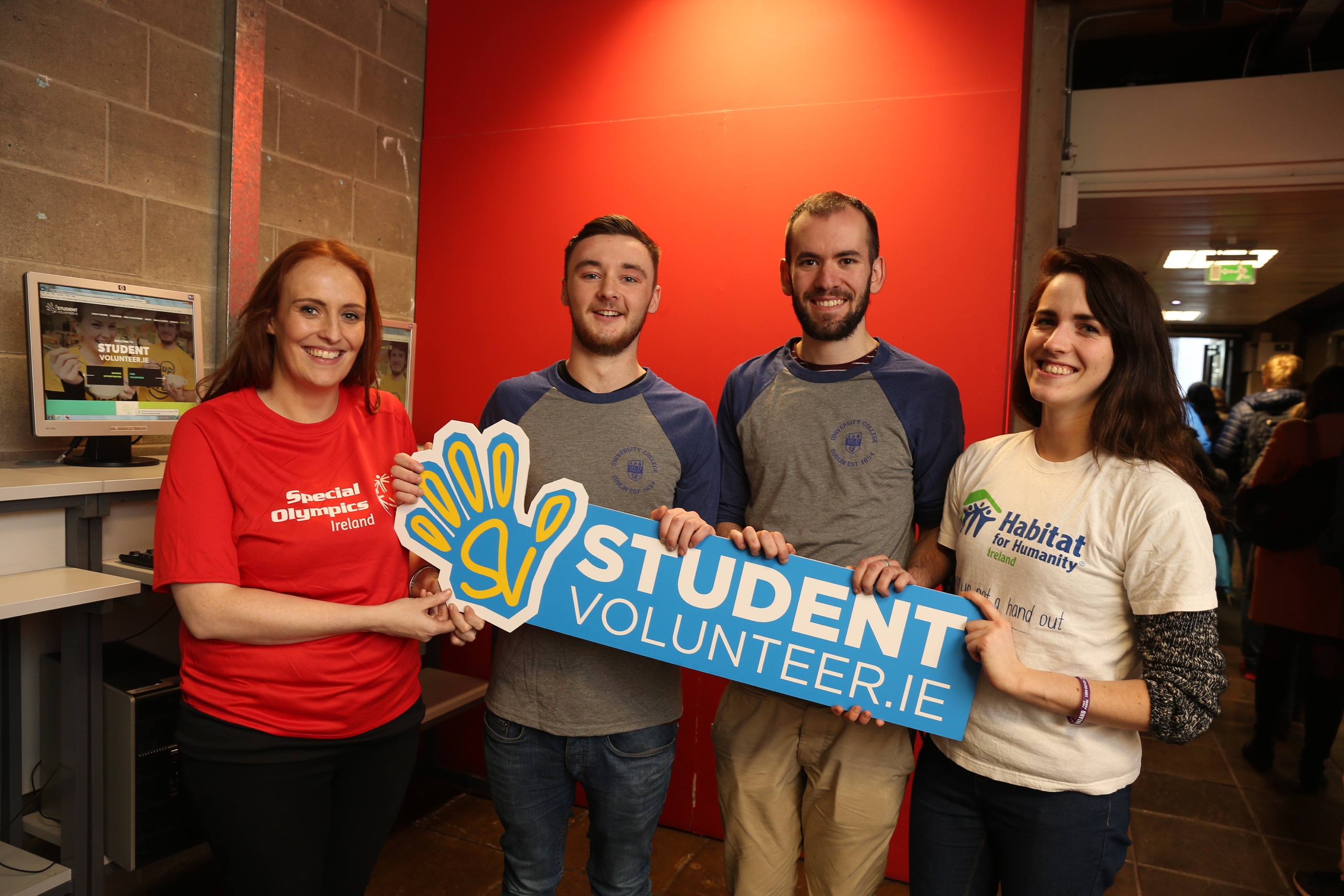 “In my involvement with youth clubs it became clear that the main role of them is to provide structure and motivation to kids from disadvantaged backgrounds. It is great to get the opportunity to volunteer alongside like-minded people as part of a team to create a better sense of social justice.” Eoin Gleeson, student, University College Dublin

Campus Engage: Based at the Irish Universities Association, Campus Engage members, including universities and Dublin Institute of Technology, work at a national level to support all colleges to implement local and national policy on civic and community engagement, to address grand societal challenges. Engagement is considered the third pillar of higher education, alongside teaching and research. www.campusengage.ie

Dec 5th UN International Volunteer Day: The International Volunteer Day (IVD), on December 5th, was designated by the United Nations in 1985 as an international observance day to celebrate the power and potential of volunteerism.  United Nations Volunteers (UNV) programme is mandated by the United Nations General Assembly to coordinate IVD. IVD is viewed as a unique chance for volunteers and organisations to celebrate their efforts, to share their values, and to promote their work amongst their communities, non-governmental organisations (NGOs) and United Nations agencies, government authorities, and the private sector. IVD 2016’s theme #GlobalApplause – give volunteers a hand, recognizes volunteers worldwide and all they do in making peace and sustainable development a reality.

THINKTECH awards:  Finalists compete for access to an award fund of up to €750,000 in grants as well as support and mentoring to further develop their social innovation. THINKTECH initiative is run by Social Innovation Fund Ireland and funded by Google and Department of Housing, Planning, Community & Local Government.

My volunteering journey began by helping out on the weekly soup run while I was in secondary school. At this time, I wasn’t hugely aware of the social deprivation in Dublin city centre, or the hardships that homeless people faced on a daily basis.

After going on soup runs on a consistent basis, I began to recognise the same faces, and those same faces began to recognise me. It was at this point I realised that the benefits of the soup run extended far beyond the hot drink or sandwich we provided to someone who may need it. What these people value far more, is a conversation with someone who doesn’t look down on them, to be shown solidarity and to have some dignity brought back into their day. They also value the friendship that develops over time. The people we met were no different to us, and shared many of the same opinions and experiences as us, it’s just that life was less fortunate to them.

This has led me to where I am now; second year of a social science undergraduate degree in UCD. Soon after I began my degree, I joined UCD SVP, where I am now vice-auditor of the society. Joining UCD SVP is the most worthwhile thing I’ve done in college to date. There is a brilliant sense of community and comradery, based on the collective desire to help others.  The society runs soup runs four nights a week, as well as being involved with various youth clubs and elderly visitations in Dublin. We help out with flat decorating, and we also have a welfare scheme, where we help students who are in short-term financial difficulty.

We recently ran ‘Homeless Week’, an annual event where we sleep outside the library for the week, to raise awareness among students on the issue, while raising much needed funds to finance our activities. The week was a huge success, raising close to €4,000 which will be put to great use to help those who really need it.

Volunteering has played a huge part in shaping me into who I am today, giving just a little can be so rewarding.

'I’ve been volunteering with SVP for over 3 years now and it is arguably the most worthwhile thing that I have done in college. Although it is a student society, there is still a notable impact that can be made on the lives of vulnerable people. Through my involvement in soup runs I have met a number of interesting people and gotten a real insight into the causes and consequences of homelessness. One of the benefits of this activity, I've found, is that it provides a sense of company to those who are otherwise isolated and we also constantly try to improve it by incorporating the requests of the homeless people into the service that we provide, such as the introduction of sanitary products. In my involvement with youth clubs it became clear that the main role of them is to provide structure and motivation to kids from disadvantaged backgrounds. It is great to get the opportunity to volunteer alongside like-minded people as part of a team to create a better sense of social justice.