For my Gaisce Gold award I did a diploma in Irish for my personal skill, trained with a personal trainer for my physical recreation and for my community involvement I ran the NUIG Suas Society. I went to Kolkata in India for three months to teach English to orphans and children living in slums for my residential journey. I’ve yet to complete my adventure journey. I’ve learnt so much from all of my Gaisce activities, and it’s definitely given me a new perspective on the world. I would highly recommend anyone who’s considering going for Gaisce to just give it a go, you gain so much from all the activities, you make loads of new friends and you really grow as a person.

Caption: NUI Galway orchestra committee selfie at the end of a long day’s rehearsal on our trip to Kylemore Abbey where we spent the October Bank Holiday weekend rehearsing for our Christmas Concert. 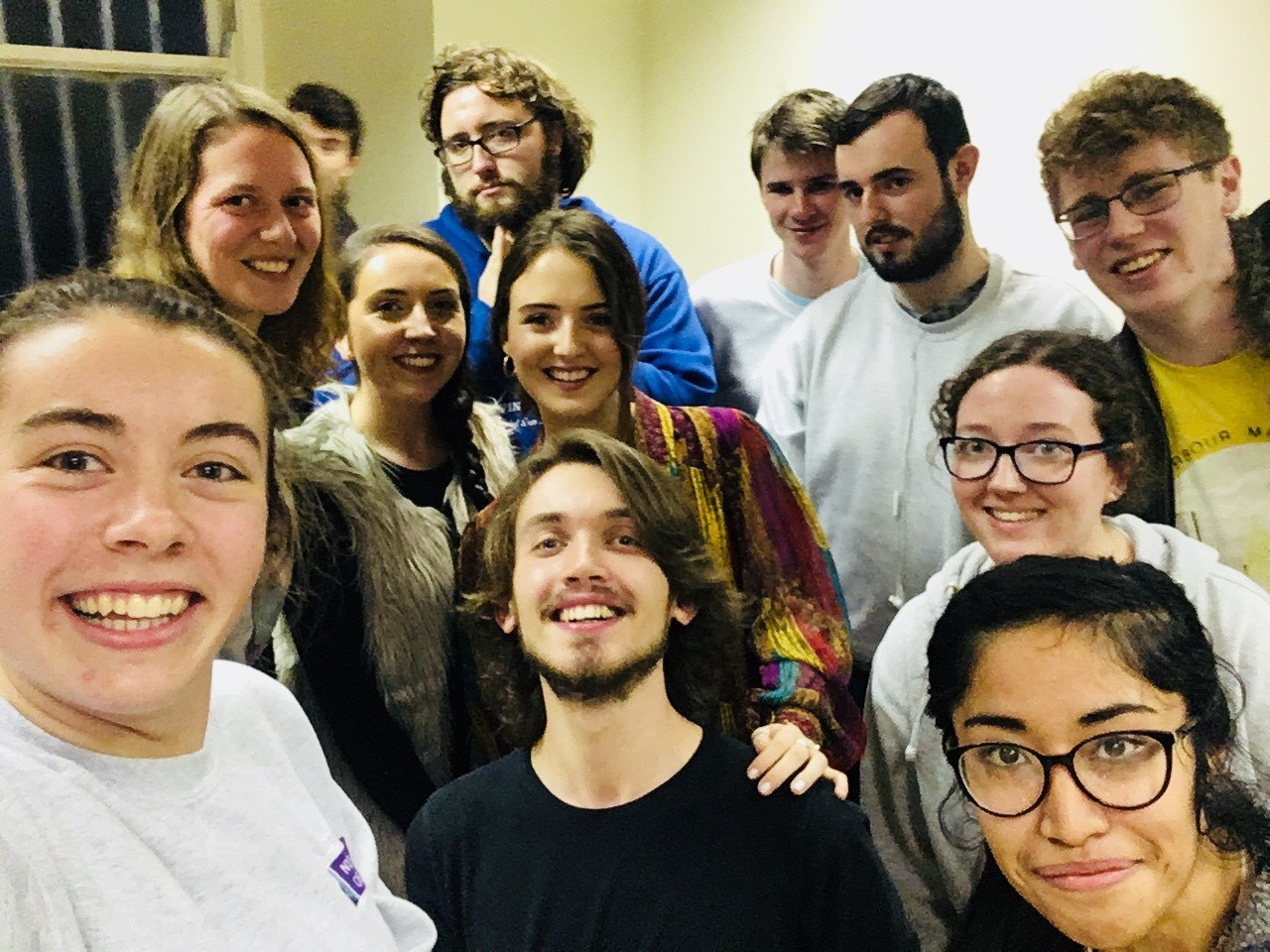 I started trying to get my gold gaisce at the end of semester two of first year (2017). At the time, I couldn’t find a PAL in the college so decided to stick with my old PAL Lisa Mc Nelis as she had just completed her own gold Gaisce. I had already completed the bronze and silver awards in transition year and fifth year in secondary school as the participation in the community and completion of the bronze gaisce award was a big part of Transition year in school (Our Lady’s Bower, Athlone).

For gold gaisce, you have to do an hour a week for 52 weeks of physical activity, community involvement and personal skill. I decided to do swimming for physical activity as I recently returned to swimming training with the NUIG team (hadn’t swam properly since TY). This year I am treasurer of the Orchestra Committee so I am counting this as my community involvement. I am also playing the trumpet in the NUIG concert orchestra and GUMS orchestra so I am counting that as my personal skill.As part of the gold gaisce, you also have to complete an adventure journey that takes place over 3 nights and 4 days. For this you must walk 80-100km over the 4 days and cook your own meals as well. I am currently planning to walk part of the camino in Spain at the end of the summer as my adventure journey. So far, I am about a quarter of the way through my gold gaisce.

Some advice that I would give to people thinking of doing Gaisce is apply now! I’m really enjoying the challenge at the moment as the different parts of the gaisce award are very encouraging and they force you to get more involved in the college clubs and societies, which is a great way to make new friends.

For my Gaisce award I’m currently playing badminton, learning to drive and volunteering at Scoil Bhríde Primary School as part of the ALIVE Homework Clubs. Gaisce has been a great opportunity to meet new people and learn new skills while participating in activities that I really enjoyed. It’s a very flexible award programme that allows you to work at your own pace to reach the goals set out and I would highly recommend it to anyone who is looking to try something different!

Caitlin recently spent time studying in Canada last year as part of her commerce degree. Prior to this experience, she completed her hours for her silver Gaisce awards. One of the areas that Caitlin participated in was in community involvement, in which she volunteered for a couple of hours a week with a local homework club. Caitlin really enjoyed her time volunteering with the kids from the two local schools. Caitlin said “I went to the school for an hour or so and I would just chat to the little kids and help them out with their homework, like you’d never feel like you were volunteering”.

Caitlin also completed her driving lessons as part of her silver award, which was something very useful to have achieved when she passed her test. This was something she had to do anyways and this is something Caitlin made a point of when we spoke to her about the award; “ ah ya sure your doing half the stuff anyways so you may as well try get the award while your doing it”. She also took up badminton for twenty-six weeks as part of the physical aspect of Gaisce. This aspect is great for getting students who aren’t involved in physical activity involved in some level of activity and it’s a great way to meet new people.

To complete the Silver award, Caitlin must complete an adventure journey which she is planning to do in the near future. She currently plans to go hiking and camping in the Wicklow mountains which would make her eligible to receive her Silver award, a great achievement for a final year student and something that will really add to her CV as a graduate next year. Caitlin said she would strongly recommend Gaisce, saying “ your doing a lot of the stuff anyways and it’s nice to give back as well, working with the kids was something I enjoyed but then you were like well I have to do the twenty-six hours anyways”.

Ciaran McDermott, a second year electronic and computer engineering student from Athlone. Ciaran is going for his gold award this year, culminating in a climb of Mount Kilimanjaro next August. Ciaran is working hard with the Mountaineering club in NUIG and he participates in rock climbing every week as part of his physical activity. For the community aspect of the programme, Ciaran is doing a mountaineering course over the course of a few weeks and is also partaking in a residential project for the gold award.

All this is building towards Ciaran’s trip to Tanzania next August. Ciaran says, “Next August I’m going to be climbing Kilimanjaro, leading a team of seven members from NUIG. I will be doing it in aid of Meningitis Research Foundation, who I am also doing a bit of work with as part of my community involvement.”

Ciaran is also a keen traditional music player and partakes in playing the accordion as his skill element. He say’s “I play with a group every week in a session in The Crane bar which is an enjoyable experience”. Overall, Ciaran also reckons that Gaisce is a good initiative and he say’s “It’s a good way to formalise things I have an interest in anyways, like it’s really just hobbies I’d be doing anyways and hopefully I’ll get a medal for doing it.”

After completing the BRONZE and SILVER GAISCE Awards in secondary school, I joined the GAISCE society in 1st year and signed up to do the GOLD. I had no Personal Skill, Community Involvement or Physical Activity in mind of what I actually wanted to do. These were decisions that I didn’t want to make too quickly. If I chose an activity that I wasn't fully interested in then I would only end up failing to complete the GOLD. As I couldn’t decide, I put pursuing the GOLD Award ‘on hold’ for a while. Later on, I returned to college for my postgraduate (masters) after spending some time abroad after my undergrad. By then it was ‘now or never’ as to whether or not I took on the GOLD challenge and followed it through to the end and I did! My activities can be seen below;

Through GAISCE, I was amazed as to what a bit of organisation and following through on a plan of action could actually achieve. My advice is just to make a plan and follow it through! Of course this challenge will take a few years to complete, so some flexibility will be required at times. Good luck with your challenge and enjoy!